Last week I posted a guide on how to play Bonus Bingo.  If you haven’t played this game yet, it’s much like regular bingo, but with a huge bonus round, random cash prize multipliers, and extra winnings for making different line combos.  Suffice to say, this is not your grandma’s bingo game.

In this edition of the how to play bonus bingo series, we’ll take a look at the Bonus Bingo Winning lines and patterns(aka all the different ways you can win extra cash while playing this supercharged version of traditional Bingo).  Let’s get started!

In the traditional game of Bingo, you are generally playing against a number of other players all trying to be the first to complete a line of numbers on a Bingo card.

In Silver Oak’s version of Bonus Bingo, however, you don’t play against other players.  Instead, you win based on the number of lines and different patterns you are able to make based on the 44 bingo balls which are drawn every turn.

Here is a list of all of the winning lines and patterns you can make in Bonus Bingo: 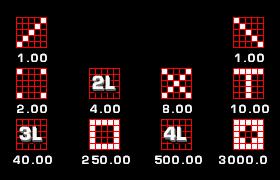 If you look at the diagram above closely, you’ll notice that there are 10 different ways to win in Bonus Bingo, ranging all the way to 3,000 times your original bet!

In the next article in the How to Play Bonus Bingo series, we’ll cover all of the different Bonus Rounds and extra cash you can win without even making one of the patterns listed above!

Ready to get started playing Bonus Bingo right now?  Download the game for free (along with over 130 other free casino games) by clicking on the Play Now button below!