The ultimate British power couple, David Beckham and his wife, Victoria, are currently expecting their fourth child later this year!

The soccer star and part-time model married his lovely fashion designer songstress back 1999. The couple have three boys together- Brooklyn, 11, Romeo, 8, and Cruz, 5.

“David and Victoria Beckham are delighted to confirm they are expecting their fourth child in the summer,” said their rep in a statement. “Brooklyn, Romeo and Cruz are very excited about the arrival of their new brother or sister.”

Beckham must be around three to four months along because she is expecting in the summer months. The couple has been very vocal about their ambitions to add a baby girl to their brood. Last year, David said in an interview, “I really want more kids and I hope it happens soon. I want a little girl. That would be amazing.”

Victoria said along the same lines, “I would love to have a little girl. If I am blessed to have another baby at some point that would be great. I’m really girlie. I’d love to dress a little girl up.”

“Yeah!” tweeted Emma Bunton, who is currently pregnant with her second child. She continued, “It’s such brilliant news!”

Victoria took to her Twitter account and added a simple message to all of her followers, “Thank you so much for your kind and beautiful messages!” she wrote. She continued, “We are all so happy and very excited!”

Congrats to the happy family– We hope that Victoria will come out with a posh maternity line now!!!

In other baby news- According to various reports, Miranda Kerr and husband Orlando Bloom welcomed a baby boy. The bundle of joy was reportedly delivered at a Los Angeles-area hospital.

The Victoria’s Secret model and hunky Lord of The Rings actor have been an item for over three years and tied the knot this past July. Rumors flew after the couple wed that Kerr was pregnant. A source told Us Magaze at the time, “She poses in lingerie. It will be obvious soon enough.” 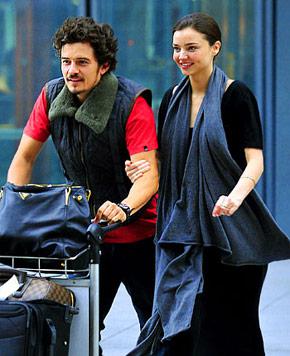 A family member told Australia’s Daily Telegraph on Thursday told the publication,  “I can confirm she did go into labor early this morning.”

Congratulations on your new bundle of joy! We have a feeling that this baby boy will be absolutely gorgeous!