When it comes to receiving hate from other nations the USA and the UK tend to take the lion’s share of the abuse.

Russia and Germany did their time weathering the world’s storm of hate, China makes all of our cool shit and Japan got a nuke dropped on their head (once again we apologize for that one; might have been a little bit over-aggressive).

Canadians are just too damn friendly to hate, Africa and Mexico has more than enough hate coming from within their own borders, India is a complete mystery, Australia is nothing but beaches and every other country is too small (no one likes to pick on the small guy).

Since the haters gotta hate, we’re left either hating on the dumb, fat, ignorant Americans or the pompous, drunk bad toothed Brits. I guess we could include the French, but people really just hate on the French for no other reason than they’re French. They get a pass, for now.

We decided to take a look at the most prolific stereotypes and accusations thrown at the USA and the UK to find out once and for all who is truly the worst. Will the crown of hate sit on the head of the Yanks or the Brits? Read on to find out.

Click on the image below to see the full version. 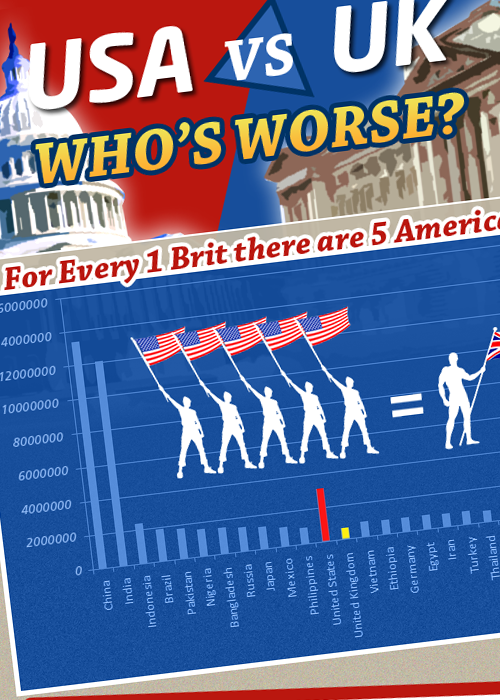 To embed this infographic click in the box below then hit Ctrl-C to copy.

Created for the blog at Silver Oak Online Casino