Jennifer Hudson 29, showed off her gorgeous new body and even more gorgeous son at Essence magazine’s lunch for ‘Black Women in Hollywood’ this week. Adorable toddler, David was dressed to the nines in a miniature waistcoat and smart pants and was even sporting Lionel Ritchie style hair. He waved to the crowds and posed for photos like a real little celeb.

Yummy mummy Jennifer wore a tight, purple Hervé Léger bandage dress and she said that her new slimline body is thanks to the Weight Watchers slimming program.

The stunning singer shot to fame on the talent show American Idol. Even though she only came seventh place, she has gone on to win a Grammy and an Oscar, showing that she can act as well as sing! Multi talented Jennifer has also had chart topping singles including ‘If This Isn’t Love’ and has sold over a million albums in the U.S alone.

Her next movie, which is a biopic of Winnie Mandela will be out this summer, and tells the intense story of Nelson Mandela’s ex wife. Even before it’s release, the movie is causing controversy, as the Creative Workers Union of South Africa is angry that the part was not given to a South African actress. They have stated their issues by explaining that ‘it can’t happen that we want to develop our own Hollywood, and yet we keep bringing in imports.” 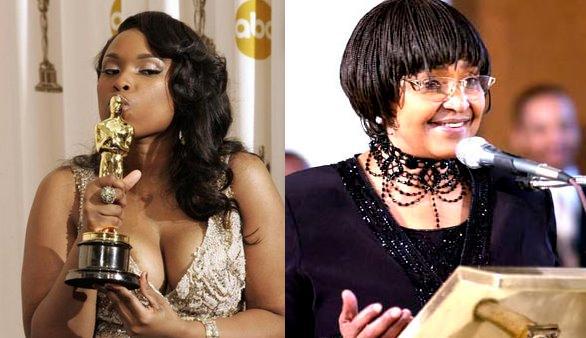 Will Jennifer receive another Oscar for her portrayal of Winnie Mandela?

Despite criticism and even threats by campaigners to stop the filming, the actress/singer has explained how hard she worked to get into the role. She told how she even spent a few days in prison to try and connect with the outspoken character of Winnie. The ex wife of South African president Nelson Mandela who is now 74, does not appreciate Jennifer’s efforts to portray her, and has not shown any support for the movie. Her lawyer even wrote to the movie’s producers in protest, ”It is difficult to understand how a production bearing the name of an individual who has not been consulted at all could ever be appropriate or tell the full story’.