After a while away from the public eye, Kirsten Dunst is back with a bang in her new movie, Melancholia. The director, Lars Von Trier who has been called ‘the most ambitious and visually distinctive filmmaker to emerge from Denmark’ is renowned for making controversial and somewhat disturbing cinema history.

He has won numerous awards at the Cannes film festivals and has wowed the world with his previous achievements including  Anti Christ and Dogville.

In this new and artistic flick, the 28 year old actress appears to have taken to nudism as she never seems to be dressed! The actress bares all as she lays completely naked amongst rocks and water as well as being seen climbing into the bath completely nude (and that’s just in the trailer!)

Kirsten plays the part of Justine, and the story tells of her marriage to Michael who is played by Swedish actor Alexander Skarsgard.

The movie takes a supernatural twist when during the wedding everyone spots a red star in the sky which turns out to be the planet Melencholia. The story unfolds as the possibility of the world ending becomes more and more possible, and Justine’s relationships unravel around her.

Other famous faces include Charlotte Gainsbourg who plays Justine’s sister, Claire and her husband who is played by Keifer Sutherland.

Kirsten has been keeping a relatively low profile since her role as Toby Maguire’s love interest in the Spiderman trilogy which concluded in 2007. She is certainly back with something different and unique to ensure that everyone remembers just who she is! 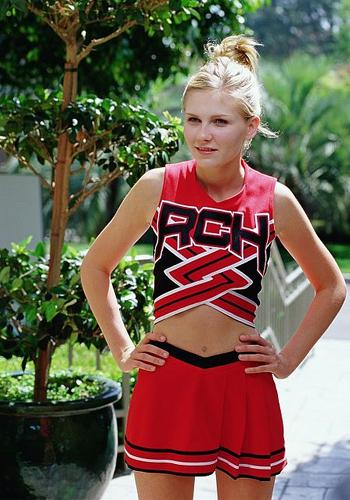 Kirsten in her Bring It On days

Melancholia is released on May 26th throughout the U.S and we can’t wait to see this new, darker side to Kirsten which will put her Bring It On teen flick era to shame.