Angelina has always been one for giving unconventional gifts. Her ex Billy Bob Thornton was privileged to receive a tube of her blood which he wore around his neck, however her newest love, Brad has now been given something that is possibly even more obscure. 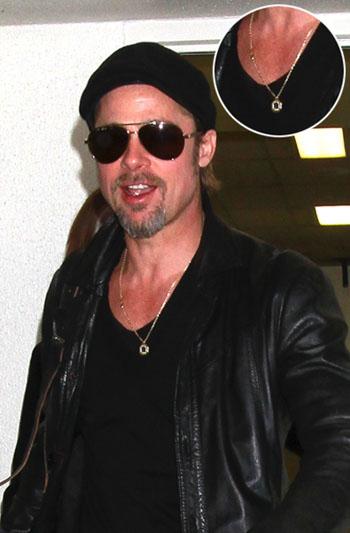 The award winning beauty had commissioned the London designer, Robert Procop to make a diamond pendant for Brad which is engraved with a loving note. What’s so strange about that you may ask? Well it’s… INVISIBLE! The piece of jewelery worth a six figure sum is so small that it can’t even be seen with the naked eye! A microscope is needed to even see what it reads!

Brad looked very proud of his new gift as he showed it off in a black t shirt at LA airport yesterday. We think that the design which was was inspired by ancient Egyptian secret message boxes is rather romantic, especially seeing as no one apart from the 2 lovebirds know what it says.  Even when the creator was grilled about the message he said, “I cannot tell you what it says” however he explained that ‘The technology is quite new, the hidden message is lasered on.’

The designer, Robert Procop is also set to do a jewelery line with Angelina called, ‘The Style Of Jolie’, and after this unique creation anything could be expected.

Brad and Angelina seem to be still going strong after 5 years together and now have 3 adopted children, Maddox, Pax, and Zahara, and 3 biological children, Shiloh, Knox, and Vivienne. We just wonder, with Angelina’s birthday not too far away, how Brad will ever be able to match up to her token of love.