Called the ‘American Dream Girl’ by Karl Lagerfeld, Blake Lively was chosen to be the face of Chanel’s new handbag line, Mademoiselle in January of this year. With her shiny blond locks and porcelain skin, she is very much the face of any high school prom queen.

This image however is not sitting comfortably with others at Chanel and a source has said that there have been ‘internal grumblings’ about the decision.

Sources have stated that many people at Chanel think that the actress is ‘off brand’ which others have interpreted as simply, ‘ the bitchy fashion industry’s clinical way of saying that Lively’s contemporary American beauty does not dovetail with Chanel USA’s efforts to sell its fashions as the height of European sophistication.’

A spokeswoman at the U.S press office for Chanel dismissed the claims that Blake will be dropped explaining that ‘Blake’s spontaneity and fresh youthful image have convinced Chanel that she is the right person to represent the house and this range of bags.’

The 23 year old stunner had previously expressed her desire to work with the French fashion house when she told the New York Times how she dreamed of being their girl,  ‘I had other opportunities and I would say, “Thank you so much, but I am holding out for Chanel, that’s who I want to be the face of.”

Blake went on to tell how everyone told her that only Europeans were ever chosen to represent Chanel in which she would answer, “Well, how great. I’ll be the first then.”‘

It is no surprise that the star is over the moon about her new project as she compared her feelings to those of a fantasy dream, ‘How did Cinderella feel when she slipped on the glass slipper? How did Snow White feel when she met her Prince Charming? A dream come true is an understatement. I can say that I feel like the happiest, luckiest girl around.’ 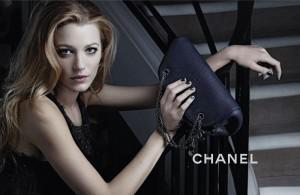 The campaign which was shot personally by Karl Lagerfeld shows Blake in a more sultry and mature tone than she has been seen before. The designer himself was thrilled with how the shoot went saying that ‘everyone fell in love with her’.

It doesn’t seem to us like Blake has anything to worry about. It appears to simply be the jealous young interns that can not suppress their green eyed monsters that are trying to grasp some attention.