After four years of hoping and dreaming, fans wishes have been granted and vampire Edward Cullen and his human lover, Bella Swan will be getting married for all to see on the big screen.

The director of the final movie in the Twilight saga, Breaking Dawn has been making every effort to conceal any details of the long awaited wedding by taking the strictest means necessary to keep it all top secret.

The Canadian set is being guarded by armed police, road blocks and concealing materials to make sure that everything is a surprise once the movie is released.

The character’s are played by Robert Pattinson, 24 , and Kristen Stewart, 20, and they delighted viewers by sparking up a real life romance.

Based on the novels by Stephanie Meyer, Breaking Dawn will conclude the story of the eternal lovers in a unique two part finale, with the first being released on November 18, and the next in 2012.

Despite the efforts of the film crew to keep all details under wraps, photos of Bella giving birth and the pair getting married have been released to the media by an unknown, devious source.

Meyer wrote on her Facebook page how much she hoped that people would wait for the movie’s release: ‘Please, for those who are posting, stop. And please, though the temptation is high, don’t view or pass on these images. Wait for the film in its beautiful, finished entirety to thrill you.’

Fans will be thrilled to see the union of everyone’s favorite mortal-vampire couple. But will they really have a happy ending? Of course not! The plot takes a drastic twist and Bella becoming pregnant with a half vampire, half human baby which begins eating her blood from inside her.

Edward must make the decision either to give Bella eternal life and turn her into a vampire or let her die. Wow this really does make the usual binge eating and weight gain that most pregnant women endure seem like a walk in the park! 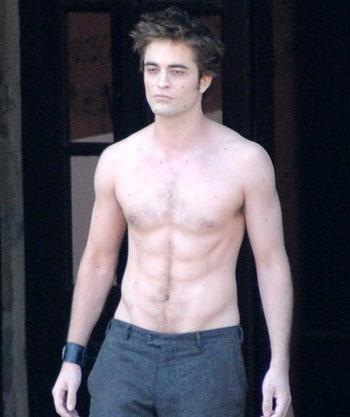 Robert says he works hard to maintain his toned body

Like all of the other movies in the series, there will be lots of skin on show and Robert has told how he really feels the pressure to look his best, ‘At the beginning of this last Twilight movie, I was at the gym constantly because I had to have my shirt off all the time. I was obsessively working out and got into being really healthy and cycling everywhere.’