Christina Aguilera was snapped at LA airport yesterday with her three year old son Max and new beau, Matthew Rutler who scurried along behind carrying her luggage.

Christina has been going through quite a hard time recently after her divorce from Jordan Bratman and it seems that she was taking the chance to escape for a few days for a short break.

The star has expressed how she is really trying to move on, ‘I’ve gone through a really hard divorce, and anyone who has gone through a divorce will speak about how hard the journey is from start to finish. I’m human too, and people make mistakes. Unfortunately the whole world gets to witness and judge’.

Despite messing up the lines of the National Anthem at the Superbowl, tripping up onstage at the Grammy Awards and being arrested for public intoxication, the 30 year old singer says that she is making progress. ‘I can laugh about my own hiccups and my own experiences in life because I’m getting through it.’

It really does seem like Christina will be the last one laughing as she is set to start working on NBC’s new talent show The Voice where she will be judging hundreds of singing hopefuls. Other judges will include Adam Levine from Maroon 5, Cee-Lo Green from Forget You and Blake Shelton. 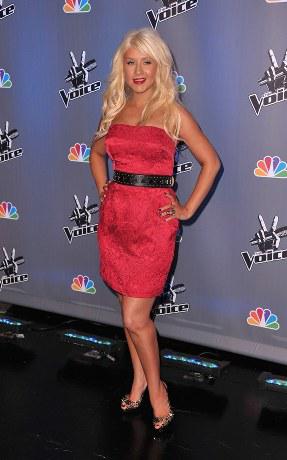 Promoting 'The Voice' at a press conference

The show is set to be broadcast on April 26th and audiences are waiting with baited breath to see whether the much awaited show is competition for Simon Cowell’s American Idol.