When the legendary Elizabeth Taylor died on Wednesday, it was only to be expected that she would be given a funeral that reflected her grace and class. The ceremony took place in a serene location in the LA hills at the Forest Lawns Memorial Park cemetery in Glendale. 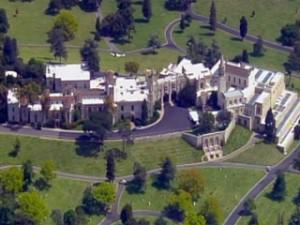 Despite the millions of people that her death has affected, the ceremony just involved a few of her closest friends and some family members. The intimate funeral was watched from afar by media journalists as helicopters circled above to watch as the actress was put to rest in the same mausoleum as her close friend Michael Jackson who died just 2 years earlier.

A spokesperson for the family told how Elizabeth had remained the ultimate diva even in death as ‘she even wanted to be late for her own funeral.’ As she had wished, her funeral car was ordered to arrive 20 minutes late so that even her body arrived in fashionable time.

Due to her Jewish faith, and her family’s desire to keep it private, the burial was over before anyone could question where their invite was. The speed at which the ceremony took place stunned many people and a spokesperson said how ‘they only announced this on the news two hours ago so nobody would have had time to get here, especially if they had to get off work.’

The Cleopatra star had a large and close family who will all be mourning her death with great sorrow including her four children, Michael and Christopher Wilding, Liza Todd and Maria Burton along with her ten grandchildren and four great grandchildren.

Despite having 7 husbands, the love of Taylor’s life was definitely Richard Burton who she in fact married twice! The pair had said in life that they wished to be buried together however this was sadly not fulfilled as Burton’s body lays in Switzerland.

Elizabeth Taylor will be remembered for her beauty, amazing AIDS awareness work and her incredible and ongoing acting career. She will be missed by many but her memory will live on.