If your trying to make it as an actress in Hollywood there are a number of things that you can do to help you along the way… Sleep with a celebrity, pretend you slept with a celebrity or get a boob job but getting on the wrong side of an A-lister such as Jennifer Aniston certainly isn’t going to do you any good!

In yet another desperate cry for attention Heidi Montag made up that Jennifer banned her from her latest film premiere of ‘Just Go With It’. Jennifer who probably doesn’t even know who Heidi is, hasn’t bothered to deny the claims as she wouldn’t waste her breath but her reps stated that, ”We have nothing to do with who is invited, but aside from that – Sony did invite Heidi and didn’t get a response from her reps.’ Heidi has tried to save face by apologizing- ‘I read that Jennifer had banned me from the premiere for being too polarizing but I know now that wasn’t true,’ the 23-year-old admitted. Her part in the movie was far from award winning as she makes a 20 second appearance as an irrelevant extra.

It is highly unlikely that she will make another appearance on the big screen as her already dreadful image takes another blow. You know when your reputation has reached an all time low when even a topless model thinks that you are trash, ‘‘Her whole relationship is fake, her whole show is fake, her whole marriage is fake, everything about her is fake’ said Tila Tequila when openly expressing her opinions of Heidi.

The blond Barbie wannabe has also been trying to portray the illusion that she is in negotiations with Andy Cohen the producer of The Real Housewives of Beverly Hills. However maybe he doesn’t think as fondly of her as she may have thought as when asked about Heidi he responded by saying ‘that trash is delusional and I would sooner stab knives into my own eyes than see her on this network’, not exactly what we would think as a sign of a future employer. 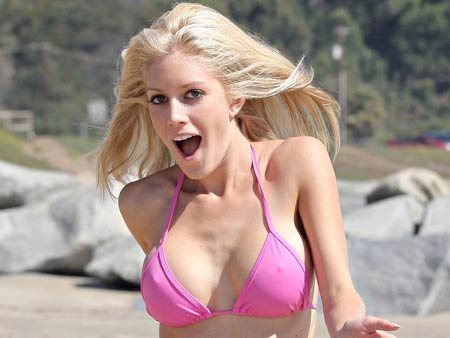 With a failed career, a deadbeat  husband and a body that is about to explode from a silicone overdose, we think that Heidi needs to back off from Hollywood for a while and maybe go back to the reality show, ‘The Hills’… Oh ye she fell out with all her friends there too!