Jude Law appears to be quite the man who likes his home comforts as he has regressed back to yet another ex girlfriend. After his relationship with Sienna Miller ended for the second time around, the Sherlock Holmes actor has fallen back into the arms of another failed love – model, Lily Cole.

The pair were spotted at the newest and most notorious London hot spot, ‘The Box’ last week. The couple seem to have re-ignited their flame as an onlooker said, ‘Jude and Lily were at a table kissing and being very flirtatious. It was clear they were comfortable with each other.’

Jude’s split with Sienna came as quite the shock to fans who believed that the gorgeous couple were meant to be. Following the breakup, Sienna claimed that the relationship had, ‘run it’s course’ and that they were both moving forwards. Jude however seems to be doing quite the opposite by moving 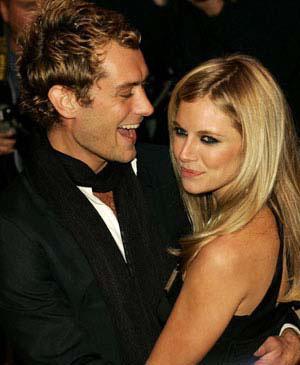 Everyone thought that they would last forever!

backwards with the 22 year old Chanel model who he had a short relationship with back in 2008. Lily has also gone through a recent breakup from boyfriend of 2 years, Enrique Murciano just last month.

Maybe love will work this time around for Jude and Lily however we think that Jude seems to forget that there were probably good reasons for his breakups in the first place!