One would think that supermodel Kate Moss’s home would be sprawling with potential buyers, however the way things are looking it seems like she will never be rid of the place. The mansion which is located in London has brought Kate nothing but stresses and it seems that it may even be cursed! 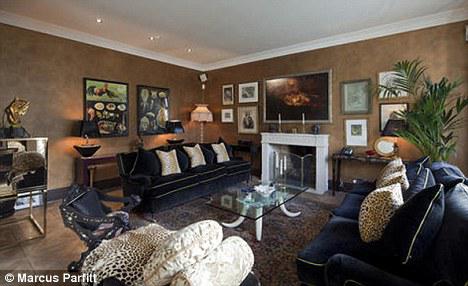 The fur and animal prints may not be to everyone's taste

Last year the house was struck with a terrible sewage flood which ended up costing the model £100,000 in damages. Also her neighbors haven’t taken too kindly to her partying ways. The police were allegedly called to her house many times due to complains about anti-social and loud behavior. To make matters even more undesirable for the prospective buyer is the noise and dirt from construction. A source stated that ‘those who have expressed an interest have been put off because the neighboring property is undergoing renovation works.’

Kate’s estate agent however thinks that it is more to do with the house’s location, ‘It’s a little bit on the periphery and from a snobbery point of view some people have not gone for it because it’s in the wrong district. As a house goes, though, it’s lovely. If it were a few streets away, it would be much more expensive.’ And who ever said the English were snobs!?

Kate is hoping to sell this mere 5 bedroom property for something a little more roomy. She has her eye set on a nine bedroom mansion in the prestigious area of Highgate in London. With two wine cellars and staff accommodation, we hope that the property will have enough space for the model and her soon to be husband, Jamie Hince.

The property which once belonged to the poet Samuel Taylor Coleridge is on the market for a whopping £8 million. There is no doubt that it will be decorated with Kate’s eccentric stamp. Her current home exhibits a neon-lit party area and a Tarzan themed living room. We are just glad that the ex cocaine addict and eternal party girl isn’t going to be our neighbor!