Photos of Lindsay Lohan have been released that show her in her usual position – sprawled on the street in a drunken state.

The images of Lindsay giggling with her head on the floor outside a club is the last thing that she wants people to see, as the terms of her probation prohibit the actress from drinking any alcohol. When news got out of the disorderly photos, Lindsay responded on Facebook by claiming that alcohol was not involved, saying, I’m always a klutz.’

The seriousness of her actions only became apparent a couple of days later and she issued a statement where she tried to defend her innocence, ‘I was NOT drinking, nor do I drink! I was with my brother, sister and friends. I was making a joke. Just because I’m out doesn’t mean I’m drinking.

It is rumored that the notorious party girl is planning to move to New York from her current home in LA, and it seems that she will be continuing her reckless behavior in the Big Apple. Lindsay’s mother, Dina Lohan has revealed that her daughter is ‘actively looking’ for apartments in the city. 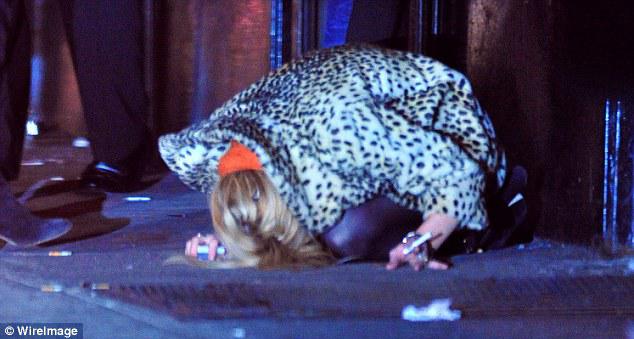 Making a fool of herself as usual

Dina went on to explain the actress’s plans, ‘she will be in New York a lot more going forward. She’s actively looking for places in the city with her younger brother Michael. She loves it here. And she has a lot of friends who already have places, so she might sublet.

Maybe the move will give a fresh start for the scandalous 24 year old and keep her out of trouble. Ahemm… Who are we kidding? With charges still floating around regarding a jewelery theft, assault and now her drinking habits being exposed yet again, we think that it will take more than a new apartment to sort Lindsay out!