Frankie Muniz or as everyone more commonly knows him as ‘Malcolm In The Middle’ of the hit TV show, appears to be in the midst of passion…. Loves young dream is just so beautiful isn’t it? Especially when weapons are pulled out and the house is left trashed! Yes the once innocent and naive child star Frankie got into an argument this week with his girlfriend, publicist Elycia Turnbow where a gun was involved! 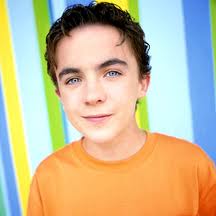 Back in his innocence as Malcolm

Police came to the house where the 25 year old actor lives and reportedly broke up the dramas. Frankie was said to have been holding a gun up to his head, threatening to end his own life only after punching Elycia. A representative however made it clear that ‘he was not suicidal,’ going on to explain that, ‘his gun was voluntarily handed over to authorities for safekeeping.’ Safekeeping!!!?! Does that mean that he will get it back in case he is feeling ‘not suicidal’ again?

Despite the dramas sources close to the couple state that they are working things out and are still together saying that, ‘as far as they are concerned, their issues are resolved’ and that ‘they are still very much a couple.’ It seems that the situation simply became out of control and both of them were highly distressed.

The police file states that, ‘”Muniz punched Turnbow and threw her into a wall.” What seems a little fishy however is the different stories and mismatches that appear to have emerged surrounding the fight. A week later, a phone conversation that was made to the police by Frankie in fact suggests that it was Elycia who was acting like the nut job. The recording includes a panicked Frankie screaming, “She’s hitting me in the face and I don’t know what to do, I’m about to lose control.” He also went on to say how she was ‘damaging the house’ but that ‘I don’t want to escalate it because the love of my life has had a bad day!’ Wow well if this is just Elycia when she gets out of the wrong side of the bed then we certainly wouldn’t want to get on the wrong side of her!