Christina Aguilera is reliving her ‘dirty’ phase as she was taken in by the police last night at 2.45am. An LA sheriff spokesperson claimed that ‘the drunken pop princess was ‘not capable of taking care of herself’. According to reports, she could not even stand up. Christina was stopped whilst driving in the car with her boyfriend Matthew Rutler, 25 who was let out on $30,000 bail after being arrested for drunk driving.

The chief information officer of LA Sheriff’s department said how it all began when ‘they witnessed a person driving erratically’ .

He went on to say  that ‘at 2.45am this morning a gentleman was stopped for allegedly driving under the influence. He was subsequently arrested and his passenger, Ms Aguilera, she was arrested.’

‘It was kind of a unique situation with this law as she was not capable of taking care of herself. She was incapacitated’

‘When she got out of the car, she couldn’t stand. We had to help her stand,’ he added. 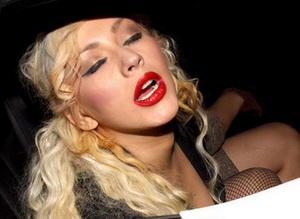 Christina claims that she doesn't have a drinking problem

Sources at U.S magazine claim that the recently divorced singer has been caught up in many alcohol driven fights in the past few months. She has even allegedly had a fight with her own mother Shelly Kearns on New Year’s Eve. Friends are urging her to go into rehab saying that ‘she’s a total mess.’

The star was released at 7.30 this morning and driven home by the West Hollywood police.

Christina’s arrest was a culmination of many embarrassing events. Last month she gatecrashed Jeremy Renner’s party and was found drunk and disgraceful in his bed.