The unlikely yet strangely cute new couple, Sean Penn and Scarlett Johansson whisked off for a romantic getaway this week in Mexico. The loved up pair left in a private jet from Van Nuys airport and were papped eating lobster and sipping margaritas at Cabo San Lucas, Mexico on Tuesday evening. It was said that the only reason that their luxurious trip was cut short was because Scarlett had to be back to continue filming her new movie, ‘We Bought A Zoo’. Sources claim that she was dying to stay longer and that the two are trying to scrape every moment that they can get to be together. 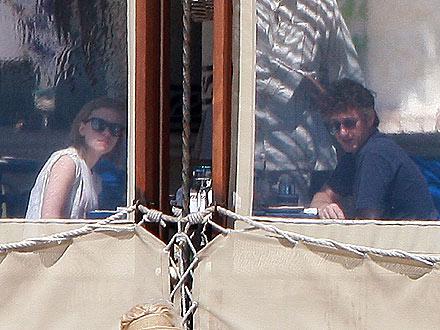 Playing footsie under the table at lunch in LA

Despite the colossal 24 year age gap, stunning Scarlett appeared to be hiding none of her affections as she was spotted intimately draping her leg over Sean at an LA restaurant last week. In fact the differences in years seems to be an attraction to the Hollywood stunner, as a source said that “she doesn’t care about the age difference. In fact that’s what makes him so attractive.”

Scarlett is certainly not keeping her feelings under wraps, and she told a friend that she is completely smitten. The friend commented that, ‘”she thinks Sean is amazing. Sure, he’s an incredible actor, but there’s depth. He’s an amazing human being who cares about politics and the world.” The pair are even planning a trip to Haiti this spring!

Both Scarlett and Sean have had a turbulent few years. The ‘Girl With A Pearl Earring’ actress just recently split with her husband Ryan Reynolds in December after 2 years and the ‘Milk’ star ended his 13 year marriage to Robin Wright in 2009.

Maybe love has come second time around for the new couple, however only time will tell as to whether age really is just a number, or if Scarlett will start to feel like she is dating her dad.