Celebs love to show off their wealth with the best fashions, cars and houses, but Sandra Bullock is spending her money in a more productive way. The generous actress has dug deep into her pockets to donate a massive $1million to the Red Cross’s efforts for the Japanese earthquake and Tsunami.

Sandra is reported to have been one of the highest Hollywood earners in 2010 earning a massive $22 million and she is predicted to earn even more this year from her many upcoming movies!

The Red Cross issued a statement to express their gratitude for the Miss Congeniality star saying that ‘the American Red Cross is extremely grateful for this generous support from Sandra Bullock and her family. This contribution is vitally important as the Red Cross works to provide critical assistance and essential relief items in this time of urgent need for so many people in Japan.’

This is not the first time that Sandra has given away extensive amounts to charity, as she kindly donated another $1million to Doctors Without Borders to help the Haiti relief after the horrific earthquake last year. She also has opened her heart to her adorable son Louis who she adopted last year from Brooklyn. 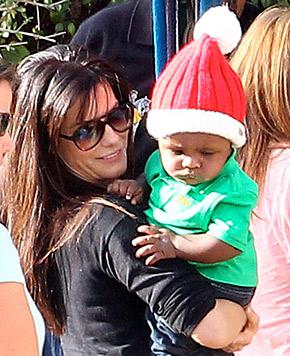 Sandra showing of Louis on the set of her new movie

Sandra is currently filming her new movie, Extremely Loud and Incredibly Close  which is being filmed in the eerie Westwood Cemetery. The doting mother even brought along baby Louis to the set. She stars along side Tom Hanks, John Goodman and James Gandolfini in this adventure/mystery flick based on the novel by Scott Rudin.

We think it’s great what Sandra is doing to help the world. It would just be really great if more celebrities could follow in her footsteps.