Scientology follower Tom Cruise has exposed yet another reason why this worryingly growing cult…oops I mean organization is based on immoral values and brainwashing techniques. Cruise showcased his collection of expensive motorcycles this week including his mighty pricey Honda Rune and Triumph Rocket both carefully custom-painted by…..SLAVES!

Yes Scientology zombies earned just $1.00/ hr to paint the motorbikes for Cruise and his brainwashing buddy, David Miscavige, the founder of Scientology. This slave like labor is not a first either as John Brousseau, a 30 year old former member of Scientology’s Sea Org claimed. He stated that he had been drafted to do the work on the bikes as Miscavige wanted to give him a gift. He said that he customized Cruise’s favorite Ford Excursion and nickel-plated and painted two of Cruise’s motorcycles under Cruise’s orders. All for $50 a week! The Scientologists claimed that this work was “supposed to be working for the betterment of mankind.” How making lavish presents for a multimillionaire celebrity helps the world is baffling to us, however the Scientology church denied all claims of the gift. They said that they never have spent any money on Cruise at all however Brousseau’s photographic evidence proves otherwise. 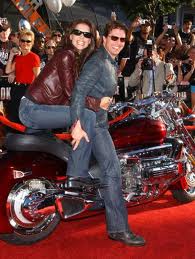 The Cruises enjoy their gift

This is not the first time that Cruise has been under scrutiny about his Scientology beliefs as he has previously publicly announced that he does not believe in mental illness (as Scientology preaches). Few can forget the scandal last year over the tragic death of John Travolta’s 16 year old son who many claim could have been prevented if he had been given proper medical treatment rather than that of Scientology.

Other Hollywood celebrities that have decided that Scientology is the way to go include Katie Holmes (who was introduced during her relationship with Tom Cruise), Peaches Geldof and Kirstie Alley. Well we think it’s just great that the celebrity figures that we all look up to as role models are a part of an organization that is currently being investigated for human trafficking and free human labor. We can only hope that the aliens land before we are all brainwashed!