Rachel Uchitel, 36 who was one of the women who exposed Tiger Woods as the cheating love rat that he is, has today revealed that she is in fact a private investigator!

The D list celebrity has announced that she is trading in her partying and luxurious lifestyle for the good of mankind, and she plans to use her knowledge to track down missing people.

Uchitel has said that exposing cases like that of Tiger Woods is not what she hopes to do as she said how ‘obviously, people want to go down the ‘cheating’ road, and assume it’s all about me finding cheating spouses. But I’m less interested in that. Missing people, cold cases, and I’m sure, a few liars out there who need to be exposed.’

The reality star who has helped to ruin a number of people’s lives through her public affairs with David Boreanaz and Tiger Woods, is trying to turn around her kharma. She says that the reason that she is going the moral route is because, ‘I want to solve cases for the underdog, for people who don’t have a voice.’ 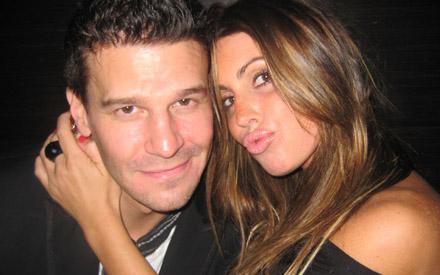 With her next catch, David Boreanaz

Rachel will be starting her position at the Detective Academy, DGA in Los Angeles, but will be working in their New York office.

Dale Gustafson, A Director at the Academy where Rachel has been training to get her Private eye badge, seems to have only great things to say about her prospects, ‘she’s very smart. She’s very meticulous and careful, and good with details, and pretty in-your-face about going in and talking to people. She’s not afraid to ask the hard questions.’ (We wonder what she did to get him to put her at the top of the class!)

The Celebrity Rehab star hopes to have her own investigation business one day  saying, ‘I’m thinking of calling it Puma PI…because I’m not yet a cougar.’