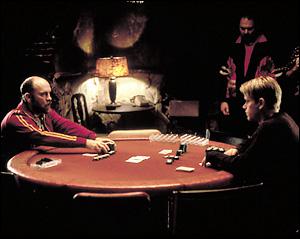 Many people who are new to the game of Poker may have been spoiled – or all but ruined – by watching too much Hollywood.  In the movies, the odds are always against the protagonist, but somehow he (or she) always seems to have an ace up their sleeve.  Films certainly embellish the more dramatic moments when portraying a Poker game, and it’s dangerous to assume that real-life functions on the same structure – but, while that cool plot twist where the bluff happens to not be a bluff (or vice versa), and the hero gives a sly and knowing look to a cringing villain, may be an idealized version of what Poker is actually like… let’s face it, it’s entertaining.

Some of the most famous film Poker moments capture this razor-wire tension.

In Maverick, we see the cowboy bravado spelled out to a T:  Maverick is up against four of a kind and a straight flush – and while he has a potential royal flush (he just needs the Ace of Spades, go figure), he decides to go all in before he even sees the card he needs.  And of course he pulls it.  But how’s that for gutsy?

Maybe a little more unbelievable, but in The Sting we see Paul Newman pull 4 Jacks to beat his opponent with 4 nines.  Moments before, the inimitable Newman had 4 threes – but since his opponent is an inexcusable cheat, we allow for a little ‘magical switch’.  I don’t condone cheating in Poker, but in this one case, it was karma.

If there are any film buffs with a passion for Poker, we can’t forget Rounders with Matt Damon.  Reprising his role as a smart kid trying to make things work in his life, Damon portrays a man with an innate talent for ‘reading’ people, and in a famous scene ends up betting an internship if he can figure out what each person’s hand is.  He does, of course – and it’s probably one of the slickest moments in any film, and showcases (however unrealistically) the role that psychology plays in the game.

And of course, we can’t leave out James Bond.  The MI6 secret agent has been a notorious Poker player, and always approaches the game with a self-assured swagger and confidence.  In a word, unflinching.  In Casino Royale the half-poisoned, beaten, and still standing hero decides to go all in and calmly lays a 5-7 suited for a straight flush to win a pot of $115 million – this hand is actually known as an ‘octopussy’, so it’s a clever homage to one of the original Bond films.

As unlikely as we are to encounter the same kind of gameplay that we see in our favourite blockbusters, they do represent the intrigue, sophistication, and hard-edge excitement that has kept Poker as a staple among playboys, amateurs, sharks, and high-rollers alike.  Films let us experience the possible, and Poker is nothing if not a game of possibilities.