When Larry Page and Sergey Brin built a search engine named BackRub at Stanford in 1996, no one could have guessed just how successful their project was about to become.

It took less than three years for the soon-to-be billionaires to change the name of their search engine to Google, incorporate and raise $25 million in funding. With the funding needed to take their project to the next step, Google quickly became the world’s most popular search engine.

While the company started with the sole purpose of building the world’s fastest, most comprehensive and accurate search engine Google has become something entirely different: the world’s largest advertising platform. (Article continues below the infographic)

Click on the graphic to see the full version. 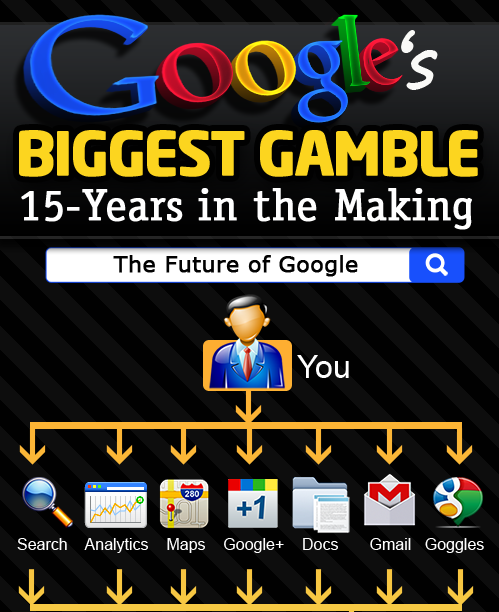 Click in the box below then hit Ctrl-C to copy

The search engine, Gmail, Google maps, analytics… every product Google creates and offers up free to the world has been created solely for three purposes:

Make no mistakes, Google is an advertising company. Instead of drawing in traffic through promotions, contests or girls in bikinis they offer up some of the world’s best (and almost entirely free) applications and tools. As far as business models go, this one is rock solid.

While it’s easy to state what a company has done in the past, Google has just given us a massive clue as to where they’re headed in the future. Google recently spent $12.5 billion to acquire Motorola Mobility. That price amounts to a third of Google’s total cash-on-hand.

The final piece of information you need is Android. Android is the mobile operating system created, updated and distributed by Google. This means Google holds the keys to the world’s second most popular mobile OS, they are now one of the world’s largest mobile phone hardware manufacturers and their main business model is to be the world’s largest advertising platform.

These three things combined make the future abundantly clear: Google is moving full-steam into mobile advertising. Our predictions include Google incorporating their current Google Maps technology, along with the GPS in their mobile phones, to provide real-time location-based advertising directly to your phone.

If their current business model is continued (and there is no reason to assume otherwise) you will likely see Google give away their phones for cost, or even free, to the world; all they will ask in return is the ability to mine your data and provide you with advertising.