What a lovely early holiday present for Playboy readers worldwide!!!

Kendra Wilkinson graces our presence once again on the cover and centerfold of December’s Playboy magazine.

If you follow E!’s Kendra, you will see that the new Mom has apparently been toying with the idea of gracing the centerfold once again.

Kendra’s husband, Hank Baskett stumbled in on his wife during a test shoot. She was apparently in the midst of deciding whether or not she should pose for a fifth time.

Kendra explains the awkward encounter with her husband, “He wasn’t mad at me for doing that photo shoot. He actually sat down with me and he went over the reasons of doing it. And you know, my reasons weren’t right. I wanted to do Playboy for the wrong reasons. The wrong reasons are to prove people wrong, not to prove it to myself but to people and to put my middle finger up to everybody and be like, ‘I’m going to do Playboy!’ But that wasn’t the right reason, you know?”

Well, whether she really wanted to pose or keep her clothes on, Playboy made the choice easy for her and decided to use some vintage photos of Kendra for December’s issue. 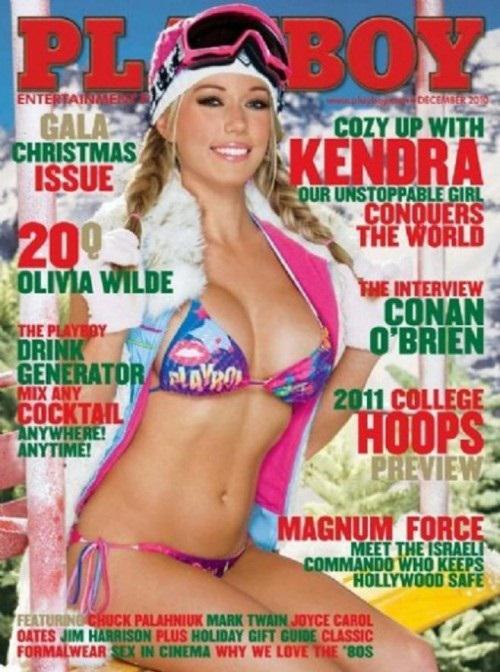 On her personal blog, Kendra explains, “The photos are from a shoot I did two years ago when I was still living in the mansion. I’m flattered to be on the cover again and as you all know Playboy has a very special place in my heart! I just wanted you guys to know I didn’t recently pose.”

Playboy commented that Kendra is featured in an “8-page nude pictorial featuring never-before-seen photos” which will be available both at news stands and online this upcoming Friday. The juicy photos were taken in 2008.

Hank has yet to voice his opinion about his wife appearing on the December cover of Playboy. We have all seen Kendra’s ‘goodies’ so we aren’t really seeing anything new. I would bet this isn’t the last time Kendra will appear on Playboy.

A small, quick word of congratulations to songstress, entertainer extraordinaire Pink and her husband Cary Hart…  It was just announced that Pink is 12 weeks pregnant. Congrats to the couple!