Now that we have seen how all of these different systems work, we put 2 of the most popular ones to the test- the Reverse Labouchere System and the Martingale System. Can they really break the bank?  Let’s Find Out!

Of these systems, the most famous is probably the Reverse Labouchere system.  This system was used by Norman Leigh and 12 companions to break the bank of the Casino Municipale in Nice back in 1966.  This true story was later chronicled in the book “Thirteen Against the Bank”, written by Norman Leigh.  Check out the book on Amazon.

Norman claims that the system alone was the key to his resounding roulette success.  In fact, Norman and his cohorts won so much money that they were banned from all casinos in France for the rest of their lives.  The story in the book has driven many a gambler to use the Reverse Labouchere system to try and beat the house.  It worked for Norman, but can it really make you millions of dollars at the roulette table?

The Martingale Roulette System is perhaps the most commonly used betting system in all of gambling.  Its simplicity, promises of winnings at the end of every round, and its ability to be applied to bets in a variety of different games has lead to its enormous popularity.  But does it really win you money at the roulette table?

To test the roulette systems, we will be using a roulette simulator developed by Woodger Computing.  James Woodger was kind enough to let us use his company’s software for the purposes of this test.

To really put these systems to the test, we are using the following methodology:

To understand what each results field means, take a look at the complete results explanation from the Woodger Software website.

Without further ado, let’s put these roulette systems to the test! 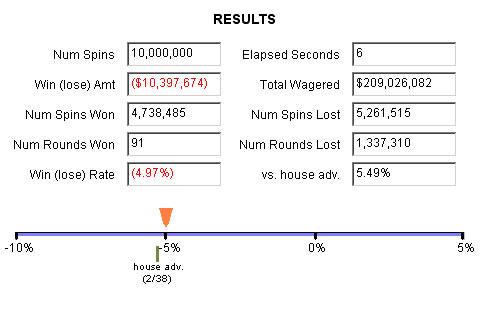 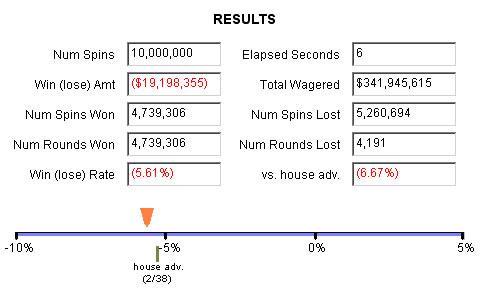 After 10,000,000 spins, it appears that the Martingale Roulette System performed worse than the Reverse Labouchere System AND worse than the normal house advantage, coming in at a lose rate of 5.61%.  After 10 million spins, starting with a $5 bet, you would lose a total of close to $20 million according to the simulation!  You also would have wagered over $341 million, so I guess $20 mil isn’t that bad if you have this kind of money to burn.

Finally, lets take a look at what would happen if we made a straight bet of $5 on every spin using no system whatsoever.  According to the laws of statistics, we should come extremely close to, if not directly on, the house advantage of 5.26%. 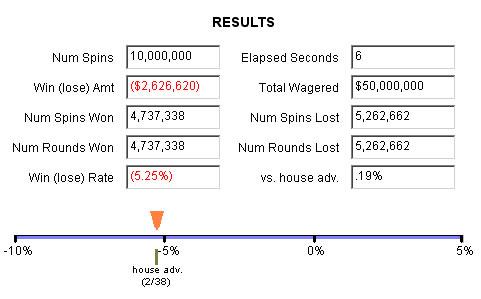 As expected, over the long term, the straight roulette bets end up losing at a rate of 5.25%, extremely close to the predicted 5.26%.  According to the simulation, simply making straight $5 bets will beat the Martingale System, but lose out to the Labouchere System.

According to these simulations, none of the systems can beat the casino.  However, the big limitation of the Martingale System is the maximum bet allowed on the table.  If a player has basically infinite money, and an extremely high table limit, would he be able to beat the casino over the long term?  Lets find out!

To test how much of an effect the table limit has on the Martingale system, I kept the same parameters as above, except I raised the table limit to $100 million.  Lets take a look at the results: 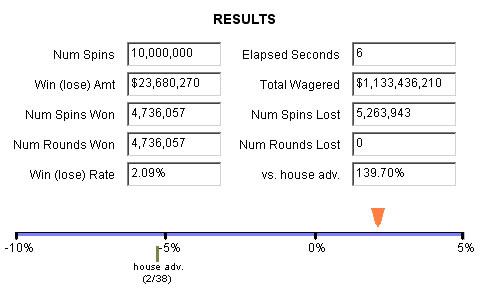 Well look at that!  Over 10 million spins, the Martingale System would make you an estimated $23,000,000+ profit!  All you have to do to achieve these results is make sure you have a starting bankroll of hundreds of millions of dollars, and find a casino that will let you play roulette with a table limit of $100,000,000.  If you can pull this off and want to bring me along, please let me know.

After putting the systems through the test, it looks like over the long run, none of the systems can really help you beat the casino.  However, if you can get lucky, playing with these system can show you some short term wins, you just need to know when to quit!

There are still thousands of players who swear by these systems and have indeed had success using them.  Just check out Norm Leigh’s book to see a great example of that.  Also, in extreme situations we have seen that the Martingale system can work over the long run; you just need an enormous bankroll and a casino that will let you make extraordinary bets at the roulette table.