In the last installment of the How To Play Red Dog series, we went through a complete Red Dog hand to show exactly how the game is played.  In this article, we’ll cover all of the rules you need to know to be a Red Dog expert!  Ready to learn a new casino game?  Let’s get started!

The Object of Red Dog

Order of Cards in Red Dog

Defining “In Between” in Red Dog

Since a player winning or losing rests completely on whether the third card falls “in between” the first two cards, it’s important to understand what is conidered “in between”.

A tie (also know as a “push”) always results in the player getting his money back.  In Red Dog, if the first two cards dealt are adjacent to each other in value OR the same value, the hand is considered a tie, and the player receives his money back.

For example, if the first two cards dealt are a 4 and a 5, the hand would be a “push” and the player would receive his money back.

In Red Dog, not every hand has the same odds.  If the first two cards you receive are a 2 and a Queen, there is an enormous spread between the two numbers, making it easy to win the hand.  However, you could get a 5 and a 7, which would have a spread of only 1, making it much harder to win.

That’s why, to encourage more betting and a fairer game, the smaller the spread between the first two cards is, the more money you receive for winning the hand.

Below is a picture of a standard Red Dog table taken from Silver Oak casino: 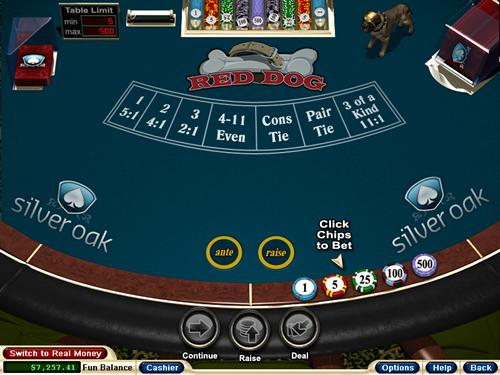 If you look right under the Red Dog logo, you’ll notice a set of numbers and their associated odds.  This is a list of the different possible spreads between any two given numbers and the payouts associated with them.

Starting at the far left, you’ll see a box with the number 1 and 5:1, the odds the casino will pay you if you win a hand with a spread of only one.

To use the example from above, if the first two cards dealt are a 7 and a 9, then the spread is only one (only being dealt an 8 as the third card can win).  According to the Red Dog table, this spread pays at 5:1, meaning a winning $5 bet would pay the player $25.

The rest of the numbers are fairly self explanatory, but here is a list of the different spreads and the odds associated with them anyway:

Those are all of the rules of Red Dog!  In the next installment in the How To Play Red Dog series, I’ll share the perfect Red Dog strategy with you, and you will never make a bad bet again!

If you are ready to start playing Red Dog now, you can download a free copy of the game (along with 130 other exciting online casino games) by clicking on the Play Now button below.  Go ahead and give your Red Dog skills a try!